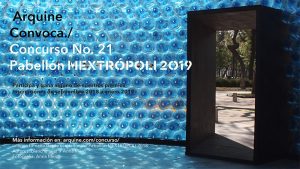 The International Architecture Competition Arquine calls to design and build a
pavilion that insert in the city temporarily, able to generate from its own discourse a
sustainable approach, which contemplates an open public program, and build a
place for interaction between architecture and citizenship.
Participants must design a structure that complies with the requirements that specify
the rules of this competition in terms of time, cost and characteristics; considered as
a fundamental part to evaluate the proposal on thematic approach should be
discussions within the structure will be carried out, this way the MEXTRÓPOLI
Pavilion will become a traveling purposeful device that every year open global space
competition from generating ideas that revolve around the development process of
architecture and the city, which in turn will become the benchmark per se of each
edition of the Festival of Architecture and City.

Can you imagine designing a pavillion for more than a thousand people?

Arquine presents the call for the construction of a pavilion that will be exhibited during MEXTRÓPOLI, the Architecture and City Festival, during its edition in 2019.

The Arquine competition begins as a discussion platform on urban issues such as the reconversion of the future airport in Mexico City, or the ways of living of migrants who are transiting between Mexico and the United States. For four years now, the competition has called not only for the presentation of ideas but also for the construction of a pavilion that is an activator of social interactions and that is made of recyclable materials. Since the competition evolved to build projects, the first and second places have been installed in Mexico City Centro Histórico.

Registrations for the Arquine Competition No.21 will be open from July 2018 till January 2019.
More info: arquine.com/concurso/

The invitation is open to architects and architecture students all over the world.
Teams, collective and individual participants are welcome. The groups may
incorporate professionals or students from other discipline. We recommend having
an architect or architecture student in the team.
It is not necessary to have some record of the professional association of the country
of origin to participate.
Each entrant or team may submit only one proposal.
In any case the team member may be part of another.
They may not participate:
• Members of the Jury of this contest, Arquine or MEXTRÓPOLI.
• People with ties of kinship with members of the Jury, spouses or persons
associated with affective similar relationship of cohabitation or affinity, or those with
stable professional relationships.