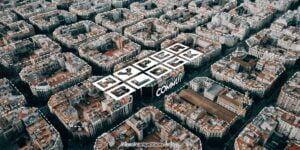 PREMISE
Urbanization has led to cities being overcrowded and cramped. Barcelona, a city known for its unique planning is slowly becoming a victim of uncontrolled urbanization. It has always been a walled city since it was founded as ‘Barcino’. In the middle ages, with growing urbanization the city couldn’t contain its population so an order was passed to expand the walls. In 1854, to deal with the rapid growth of the city the Spanish government finally gave the order to take down the walls. As soon as the walls were demolished, plans began for the expansion of the city to promote the Ensanche Project (Eixample District) giving rise to the ‘City of Cerda’.

In 1855, Ildefons Cerda’s utopian plan was approved by the central Spanish government. The design envisioned a rationalized open city, with a grid of wide streets. What was unique about Cerda’s grid was the refusal to address hierarchies apart from few exceptions (diagonal avenues and the Gran Via). The goal was to combine rural living (green spaces, ventilation, fresh air, community) and urban living (commerce, facilities, culture) So what made the humanitarian marvel collapse?

Cerda imagined a garden city for Barcelona but with the growing demands of the population, the majority of the land was covered for construction. As a result, green spaces disappeared, roads became narrower, provision of sunlight and ventilation and therefore psychological well-being was compromised.
What was once a design to make Barcelona healthier, now has to be dramatically rethought for the same reasons.

A city like Barcelona is meant to attract people. As a result, it is one of the densest cities of Europe. Population density is deemed to grow in the coming years as more and more people are moving to cities in search of better opportunities. Is there an alternative design scheme to attain controlled urbanization?

CHALLENGE
Cerda 20 invites visionary ideas for redesigning the city with one of the most unique planning, set in the distant future, ‘2050’. The brief is set up to identify what should have been and what it can be in the future.

Musing over culture and heritage of Barcelona, redesign Cerda blocks, recognizing the current and possible social and environmental challenges. Also plan pedestrian and vehicular movement around it.