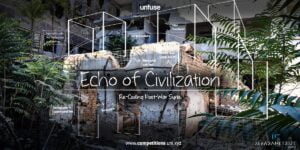 The Syrian Civil War is one of the worst humanitarian crises, that has entered its eighth year. There are a lot of plans for post-war reconstruction, and most of these plans are for the complete demolition of the existing damaged fabric by replacing it with a new urban fabric. But in the process, the participation of the community in these reconstructing plans is completely missing.

Post-war effects are widely spread and can be long term or short term. Meaningful post-war redevelopment should consider the balance between architectural infrastructure, public health provision, and social order. Reducing the importance of one of these three axes can lead to a collapse of social structure, services, education, health care and also has a long-term impact on society.

The main focus should be on understanding how communities can be involved in the rehabilitation of these aspects.
When we look at the image of the ancient cities in the Middle Eastern regions, we see the urban texture that extends horizontally according to the needs of societies. If we bring the image closer, we see the paths that extend like veins reaching to the unit that forms all this beauty. At center stage of this discovery often is the ancient mud house.

Ancient mud houses are the basis of societies in these regions. Especially since they are built by the inhabitants, from their land, and to serve their environment. It is a sustainable urban social and functional fabric that varies between cities and rural areas.

CHALLENGE
Challenge is to create a space that acts as a vessel in reviving the destructed neighborhoods and encouraging inhabitants to come back. A space that respects the past, responds to present and incorporates the possibility of a bright future of Syria.
A space that reinterprets the ancient mud house and uses it as a tool for a cultural revival.

The cost of war cannot be quantified but the price Syria has to pay now is much more than it can afford. And even if we assume that the conflict is solved, still the daily life they used to live is impaired. It is the community of people in Syria that have suffered the most and without including them, the significance of the place will perish.

Minimum eligible age for participation is 18 years.
There is no restriction on the degree of design disciplines to participate in the challenge.
Participation in the competition can happen in a team as well as an individual.
Maximum numbers of participants in a team are 4.