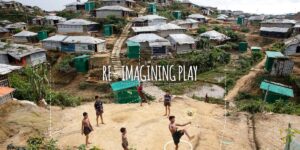 PREMISE
Recent times have witnessed a shift in humanity like never before, more than 70 million people around the world are displaced from their homes. Fleeing their countries entirely due to persecution, war or violence, almost 25.9 million of these are seeking asylum in other countries, becoming refugees.
According to the Office of the UN High Commissioner for Refugees (UNHCR) out of a global population of 7.2 million school-age refugee children, four million do not attend lessons of any kind. Studies show child refugees are particularly vulnerable and are five times more likely never to go to school than non-refugee children on a global level.

CHALLENGE
In most circumstances, play can be invigorating, stimulating, freeing and fun. Here it is much more than a fundamental form of therapy. A dedicated play space can ensure a safe and caring environment for kids to freely express themselves through the process of play.
Most importantly, make play the source of happiness it should be.

CONTEXT
Intended as a temporary accommodation for populations which have been forced to leave their homes due to war or violence, refugee camps provide safety and shelter for the world’s most vulnerable people.

With recent times seeing large scale migration, camps are over reaching their intended capacities, and situations seem grave. Overcrowded, unhygienic and violence-prone, these camps are home to people who are forced to stay in the camp for months, some even years, by the slow and heavily bureaucratic asylum process.

The Aegean Islands of Greece see scores of migrants arrive each day, hoping to eventually move on to richer European Countries. Samos is one of the five islands that the Greek Government has established for refugee camps. Barely two meters off the coast of Turkey, the camp at Samos was initially built to house 650 people. Today it has around nine times that capacity.

Unplanned and organic, the Kutupalong Refugee Camp is one of the two refugee camps hosted by the Bangladeshi government. Home to an estimated 600,000 people, in an area of just 13 square kilometers, it is stretching its infrastructure and services to maximum limits.

SITE
The design site is conceived as an adaptive volume, which can fit to almost any space which calls for action. A singular module of 2m x 2m x 2m, used sequentially to form a larger plot. The height is restricted at 4m, but participants may consider a variety of uses when put in different locations, multiple configuration or contexts. Keep in mind the probability of vandalism.

Judges:
To be announced.

Develop an architectural concept creating a safe, stable happy place for children in an otherwise chaotic world. Seeing this as a two-step problem, attempt to bring in education to the children, and secondly focus on letting the children be children.