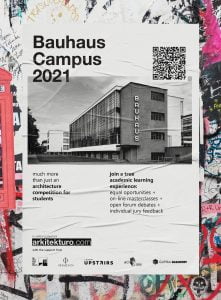 After putting his career as an architect on hold to fight the first world war between 1914 and 1918, Walter Gropius sensed the world needed a radical change, a change in which arts and architecture would play a fundamental role. His previous ideas of what architecture should be didn’t quite make sense anymore. His new vision of architecture was one were all arts came together to re-imagine the material world, were craftsmanship would reclaim its leading position in the production process and were artists would find a way to imprint their soul and essence into rational, useful and beautiful objects that could be mass produced following the ideals of Fordism and Taylorism.
It was 1919 in post-war Weimar, Germany. Walter Gropius had just founded the Bauhaus. One of the most radical evolution architecture has ever experienced was about to begin.
During the next 14 years the Bauhaus explored these ideals to its full extent. Never free from criticisms and political pressure, the school had to move from Weimar to Dessau in 1925, and later to Berlin in 1930. Directors didn’t have it easy either, with Gropius being forced to resign in 1928 and his successor Hannes Meyer being replaced by Ludwing Mies der Rohe after only two short years in office in 1930. Finally, in 1933, the Bauhaus leadership, with Mies at the helm, decided to close the school under Nazi pressure. At that time, with the Bauhaus dismantled and most of it’s staff spread all over the world to avoid the Nazi regime, one could easily think the whole project was a failure.However, those 14 short years were enough for Gropius’s vision to consolidate and influence a generation who would remain faithful to his ideals and spread them wherever destiny took them. Mies went on to design the IIT campus and become a teacher in Chicago, Josef and Anni Albers had successful teaching careers at Black Mountain College and Yale, while Breuer and Gropius himself found their places at Harvard, just to name a few.Josef Albers, Hinnerk Scheper, Georg Muche, Laslo Moholy Nagy, Herbert Bayer, Joost Schmidt, Walter Gropius, Marcel Breuer, Wassily Kandinsky, Paul Klee, Lyonel Feininger, Gunta Stozl et Oskar Schlemmer on the roof of the Bauhaus in Weimar c. 1920.

It might not have been that obvious to them back then, but looking back from were we stand today we can clearly see how those years at the Bauhaus had an enormous impact in the architects that were to come, for decades. Even today, most of their ideas are still valid. It’s been over a century since Gropius came back from the war, and even though most of the principles of the Bauhaus still stand, the world in which we live in has changed rapidly. The internet has forever changed the way we communicate and share information. The concept of family is shifting, with birth rates slowing drastically in the first world. Individuals are willing to relocate to different parts of the world in the blink of an eye. New construction materials and techniques have allowed us to settle in places with extreme weather conditions. And after a series of truly unpredictable political and natural events during the past few years, we have come to accept that we don’t know what the future holds for us anymore. If the Bauhaus was still active today, we believe it would welcome all these new variables with excitement, challenge their own ideas and adapt their solutions to this new reality.

The challenge
For the sake of this challenge we will imagine that a group of contemporary, visionary architects, has come together to revive the idea that once lead to the creation of the Bauhaus. This group believes, as once Gropius did, that radical changes are happening in life and society, and that architecture should play a major role in them. After all, almost everything we do happens under some sort of architecture. The spaces where we rest, where we work, where we exercise, chat, create, cook, sleep, dream, live… they all must be designed. But how can we be sure the ideas and solutions that lead these designs are still the best ones, when the way in which we live and perform many of these tasks has changed so much?
Maybe it’s time to take a step back and challenge what we know, what we think is “right” and explore new solutions that embrace society’s new reality, new habits, new visions, hopes and dreams, and empower us to pursue them and live them fully. The challenge you are about to embark is the design of the new 2021 Bauhaus Campus. An educational space where the status quo of architecture can be challenged and were new ideas and solutions can be explored.The 2021 Bauhaus Campus is not meant to be a traditional university, but a creative and exploratory space instead. The campus will not offer the traditional undergraduate, graduate or masters programs, there will be no exams, no grades… Instead, students and professionals from around the globe who have shown an interested in proposing design and architecture solutions to today’s problems, will be invited to come together on campus for different periods of time to share their ideas and visions.
There will be no pre-established hierarchy between campus attendees. Anyone will be free to organize a group, a class or a workshop, to share their knowledge or learn together, and anyone will be free to join or attend if they have an interest in the topic. A bi-annual exhibition will also be organized on campus to show the ideas being explored and the solutions being suggested to the world, in the hopes that they will inspire others. Anyone will be welcome to attend these exhibitions, whether on campus or online, and take these ideas with them the same way the Bauhaus staff took their ideas with them when they were forced to the exile.The impact of the new 2021 Bauhaus Campus might not be obvious at first, the same way the influence of the original Bauhaus might have been hard to see until many years after it was dismantled. But one should always trust that, by pushing the limits and challenging the norm, we are helping architecture stay current and move forward, and hopefully, make the world a better place.

Architecture Competition for Students organized by WikiArquitectura. Fair pricing, equal opportunities, open forums, feedback from the jury and much more!The challenge you are about to embark is the design of the new 2021 Bauhaus Campus. An educational space where the status quo of architecture can be challenged and were new ideas and solutions can be explored.

We want every student to walk away with something from this experience. That’s why just by joining all students will be able to get:
– Access to exclusive online lectures about the Bauhaus and how to create a winning competition board.
– Personalized feedback from the jury.
– Printed participation certificate.
On top of that, awarded projects will get prizes from the following pool:
– 3000€ in cash.
– Subscription to architecture magazines of your choice.
– Pack of Phaidon architecture books.
– GoPillar Academy courses of your choice.
– Publication on digital media.

Registration is open to any student actively enrolled in an undergrad program. Master students can also be eligible as long as they started their masters no longer than 18 months after finishing their undergrad program.

Competition to design a concept stadium: Staydium 2.0 – Stadium that stay

LIBGEN – Towards a new class of evolutionary... 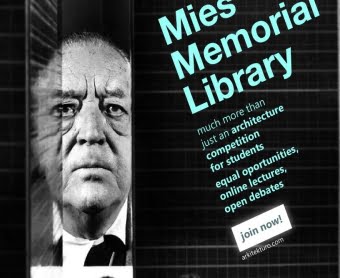 Child Play: Competition to Design a...