The three finalists of the international open competition of architectural concepts for Ukraina Hotel entryway were announced. They are:

The proposed concept for the new entryway for the hotel solves several of the main tasks: it is independent in constructive and stylistic terms and yet it does not dissonant in its composition alongside the existing architectural monument. The installation not only fulfills its practical function as a protective canopy, but at the same time it is a piece of modern design in its own right which works in contrast with the historical building. It creates a dialogue between the old and the new and on a variety of levels; including in terms of rhythm, scale and material. The design of the entryway for the Ukraina Hotel creates the visual effect of a light ribbon-like awning of snow-white glass, flowing around 250 meters and held up from the ground by thin chrome columns. The supports for the awning are placed at broken intervals of between three and six meters apart so that the newly-created rhythm ‘has its own melody’ and doesn’t violate the established composition of the historical building. The linear structure of the awning, soaring between Kutuzovsky Prospekt and Taras Schevchenko Embankment, transforms both the approach to the hotel and the descent to the embankment, in one single promenade. The awning is located along the main façade of the building, crossing the driveway in two places (in the area of thoroughfare at the North-West corner of the façade and at the embankment area). This allows the canopy not only to cover the rampant for accessing the hotel, but it creates conditions for the emergence of a new public space; a place for meetings and walks.

The Ukraina Hotel entryway awning is a 112 long metal sheet, or ‘rushnik’, hanging between two massive propylaea in a slight downward curve (a “rushnik” is an embroidered towel traditionally used to offer bread and salt to guests welcomed to one’s home in Russia and other Eastern European countries). The propylaea are made from square blocks of cast iron (6 m x 6m). The height of the blocks conforms with the rhythm of the horizontal structure of the hotel entrance level. They rest on cast iron pedestals. One of the propylaea is a structural support, while the other serves as a counterweight. The counterweight rests on a cylinder hinge made of extra high strength steel. This is the only asymmetrical detail in the otherwise highly symmetrical structure. The stand-alone structure on independent foundations is located away from the existing Hotel Ukraina portico and can thus be interpreted as an avant-portico of sorts. A tectonic structure and imagery strikingly different from the order of the original building helps the avant-portico avoid being either in confrontation with or contraposition to the hotel building. It is neither in contrast to or flirtation with the original building; but rather it is neutral, in “exterritoriality” and autonomy.

The size of the load-bearing pillars, their horizontal rhythm, as well as the distance between the propylaea aligns the new structure with the monumental scale of the hotel. The area under the canopy becomes a large public space that can be used as an event venue.

The entrance portico of the Ukraina hotel, with four double massive columns and monumental doors is original and is one of the most important elements of the facade of the building. Therefore, the main task of an architectural proposal for an entry canopy was the creation of an structure which would not make a negative impact on the façade and also wouldn’t violate the compositional structure of the building. In our view, the architecture of the new structure should be neutral, visually light and should not engage in a dialogue with the building.
The awning over the entrance, designed in the form of rectangular plate, or ‘blade’, covers the entrance area and access ramps. It is free of visible support which visually lightens the structure, making it weightless. As it is planned that the canopy be equipped with a constantly illuminated inner surface, it will be perceived as a large rectangular, though extremely thin lamp, hovering in the air.
The extended scaling facade line of the canopy emphasizes the rhythm of horizontal divisions of the building’s facade. The Structure of the awning is formed by the system of cross- shaped trusses connected with steel beams (working on compression) built into the existing columns and fixed with steel braces located between the pylons at the outer wall of the portico. The supporting vertical structures are based on the existing foundations. The lower surface of the canopy is filled with light boxes and built-in LED strips that provide uniform illumination of the entire surface. It is proposed that the territory along the main entrance is cleared of cars, and for these areas to be covered with lawns and squares. 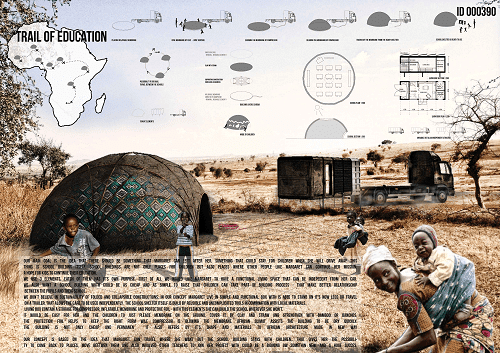