SAN DIEGO, CALIF. (September 8, 2014) – Three inspired and imaginative Sukkah designs were chosen as finalists by a panel of judges for the Sukkot at the Ranch Design Competition. The three finalists are: Herencia Del Rico and Max Magac, students of the New School of Architecture in San Diego, Calif.; Yoshi Silverstein, founder and lead designer-educator of Mitsui Design, based in Washington D.C. who previously served as Education Director of Kayam Farm at the Pearlstone Center and as Jewish Environmental Educator at the Teva Learning Center; and Chris and Sasha Verone, a husband and wife architecture team, also based in San Diego. Volunteers will construct the designs on the Ranch at 441 Saxony Road in Encinitas, Calif. on October 5. The winning design will be chosen by people’s choice and awarded $3600 at the Sukkot at the Ranch Festival on October 12.

The Sukkah Design Competition invited designers to reimagine the ancient temporary structure known as a Sukkah, which has been built during the Jewish harvest festival of Sukkot since biblical times. A Sukkah is traditionally erected for one week each autumn to commemorate the holiday of Sukkot in celebration and gratitude of the harvest.  It is customary, within the temporary walls of the Sukkah, to share meals, entertain, and rejoice.

“The selected finalists (mostly) reveal a bias on the part of the jury for Sukkahs…that were physically delicate, visually light and potentially nomadic, whose skins were photonically translucent and that confused the perceived boundaries between inside and out, sky and earth. They were composed of materials that were resolutely of and in the organic world, all to suggest that the Sukkah is as much a creation of the mind as it is a dwelling on the ground,” said Davidson Norris.

This year’s themes are release and renewal and the three dimensional canvas to express these themes is the Sukkah. Each Sukkah is required to adhere to the following guidelines: the structure must be temporary; it must have at least two-and-a-half walls; it must be big enough to contain a table and most of a person’s body; and it must have a roof made of shade-providing organic materials through which a person can see the stars. 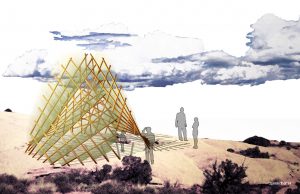 “Three Petals formally resembles and is homage to the tipi – the temporary shelter used by many of America’s nomadic natives…and is a remembrance of the 40 years Jews existed in their own nomadic state. The festival of Sukkot is a time for spiritual reflection, so the upwardly sloping walls…direct the eyes of the visitor toward the heavens.”

“The use of three petals is very symbolic because the number three is significant in spirituality. The lightness of the structure contributes to the temporary feeling of the Sukkah. Humbleness of the materials, waterproof cardboard tubes, goes back to the original shelter in using what they had available.” 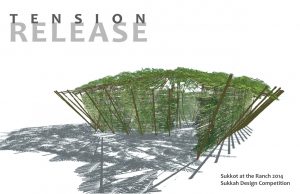 “Release is not possible without tension…(this sukkah) is held together by tension. Metaphorically the tension of an impermanent shelter that both shades from the sun and…asks us to physically experience this liminal state of vulnerability. Physically this Sukkah’s structure is held together by tension – hemp cordage pulled taut around a central hub made from a reclaimed bicycle wheel and strung around angled bamboo posts dug into the ground. “

“There is something magical about this space. It gives a quality of depth that provokes thought and makes you want to visit over and over again. The structure is contained and disciplined, yet fluid, organic and free. “ 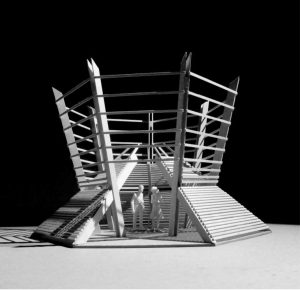 Designed by Chris and Sasha Verone

“The seven sides of this sukkah structure represent the seven days of the week and the seven year cycle. Once inside the Sukkah, one’s awareness of the outside world is diminished. The base of the Sukkah structure tapers inwards to harvest one’s thoughts, wishes and concerns. The top tapers outwards to release them to the sky.”

“Both vulnerable and protected, delicate and well-built, this proposal stood out for its ability to translate the themes of the competition — most notably the seven-day and seven-year cycles of rest — into architectural space. A seven-sided Sukkah completely open on one side, it both invites visitors to come inside and makes clear, once they get there, that ultimately no building can take the place of community or tradition in protecting us or making us whole.”

About the Leichtag Foundation: 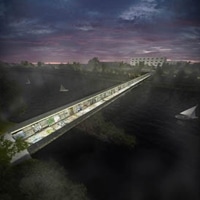 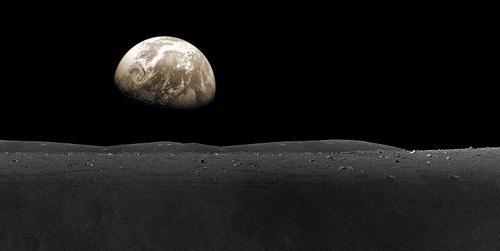