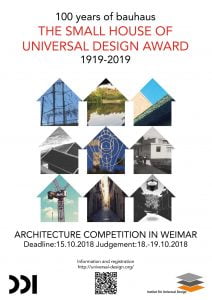 Since its foundation in 1919 in Weimar, “Bauhaus” is not just the name of Walter Gropius’ legendary school of building – it also stands for unprecedented ideas as well as for having the courage to create the future while considering present global and social issues.
The initial purpose was to create a school of building which would achieve a total work of art through its interdisciplinary ways.

On the occasion of the 100th anniversary of the foundation of Bauhaus, Universal Design will be hosting the architecture competition “The Small House of Universal Design Award” in 2019.
Seizing the concept of Germany’s “Schrebergärten”, translating as allotment gardens which often have small houses built on them, this competition calls out to architects, designers, entrepreneurs and students to design and create a small house. Following the impact Bauhaus had in its original days, we are looking for ideas which, whilst being aware of and offering solutions to the pressing issues of our current age, creatively take a step towards the future.
Furthermore, the design should follow the ideals and values of Universal Design, including without limitation the idea of a “design for all” where all design originates from the human as the centre and beginning, as well as sustainability. This could for example mean a house built accordingly to the needs of humans of all ages and circumstances which could be expressed by adjusting room measures. It could also mean the use of modern materials or technologies to achieve sustainable architecture. However, ideas are not limited to these examples.

The award will be hosted at the Ernst Neufert Box – named after one of Bauhaus’ first students in 1919, who later went on to become a colleague and leader close to his former teacher Walter Gropius – in Weimar-Gelmeroda, Germany.

Since The Small House of Universal Design Award is an international competition, we are planning to host the winner exhibition in Japan at a later point in time, too.

On the occasion of 100 years of German Bauhaus, Universal Design calls out to architects, designers, entrepreneurs across the globe for The Small House of Universal Design Award competition. The winning entry for a small house will be exhibited close to Bauhaus’ roots in Weimar, Germany, and may also get the opportunity to travel to other locations internationally.

A total selection of 20 of the most outstanding entries
will be exhibited at the Ernst Neufert Box in Weimar,
Germany.
The top submission will be awarded 2,000 € price
money. It is furthermore planned to realise and build
the house in Japan following the design of the top
submission.

The competition is open to registration for basically anyone who is able to pay the admission fee, listed below according to the participant categories:
Company: 800,-€
Professional individuals: 500,-€
Start-ups (within 5 years after starting a business):
300,-€
University/School (group): 200,-€
Students: 100,-€